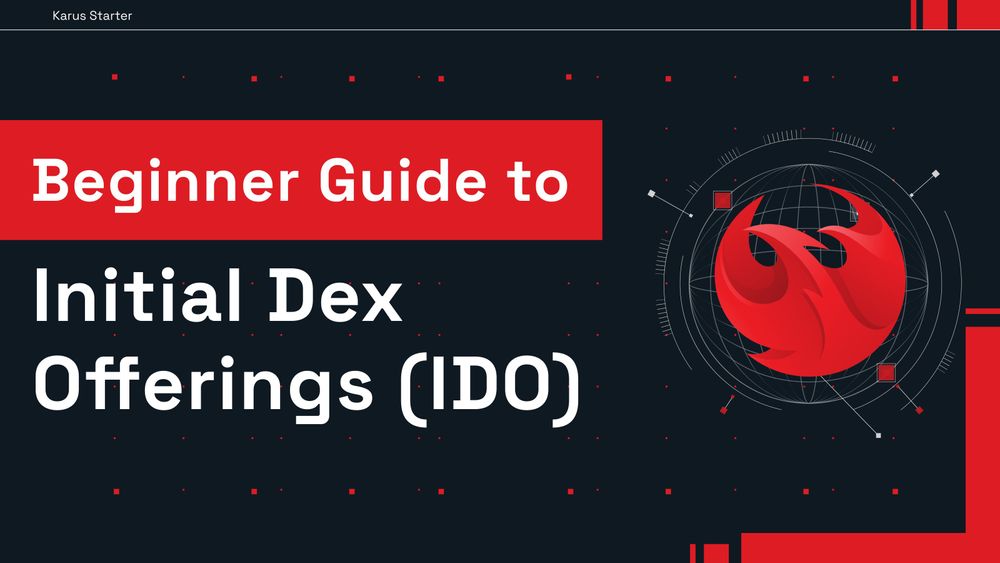 Our beginner guide to Initial dex offering (IDO), how does it differ to initial Coin offerings (ICO) and Initial exchange offerings (IEO).

Introduction to the IDO

Short for an Initial Dex Offering, the IDO is one of blockchain’s newest and most innovative forms of project crowdfunding. Practically, it can be broken down into two phases. The first phase is contained within a launchpad, which is a platform dedicated to incubating, promoting, and facilitating fundraising for brand new crypto projects. Due to their professional network and large community base, launchpads are able to offer infrastructure for high impact, high growth early project development and project launches. From the investors perspective, holding the launchpad’s native token grants access to projects before they hit the open market on decentralized exchanges. Through the platform, launchpad community members get exclusive access to tokens at a floor price, set by the first public funding round.

The second phase of an IDO is marked by the token’s migration to a decentralized exchange, such as Uniswap on the Ethereum network or Acala on Kusama. At this point, the token becomes publicly tradable and available to the entire retail market, who often scoop up the launched token as fast as possible, pumping the price sometimes to triple digit returns. For launchpad participants, this is the most exciting part because it bears all the profitability that comes with buying-in first.

Differences between ICO vs IEO vs IDO

To understand the benefits of an IDO modeled raise, it’s helpful to put the IDO in its proper context as an evolved improvement on the earlier ICO and IEO crowdfunding models. When cryptocurrency first penetrated mainstream attention at the tail-end of the 2017 bull run, the frenzy of blockchain based development brought with it a host of new projects looking to capitalize on the fervor and potential funding opportunities within the blockchain ecosystem. Unlike IDOs, which are decentralized by nature, ICOs – or Initial Coin Offerings – were highly centralized and run by the launching projects themselves, in-house. With no third party oversight nor blockchain based accountability, ICOs were ripe for false starts, rugpulls, and outright scams. Very few ICOs gathered enough funds to launch on exchanges while many more simply disappeared, taking with them millions of dollars.

IEOs, or Initial Exchange Offerings, rose up to improve on the ICO model by introducing regulation and accountability. As the name implies, via an IEO, a project launches straight to a centralized exchange, in which it is immediately tradable on the open market. The primary benefit of the IEO is it’s accompanied vetting project in which the team and their tech is highly scrutinized for the sake of all investors. The primary drawback is that IEO’s are extremely expensive and pose an unnecessarily high barrier to entry; so high, that many projects needed an alternative. In 2020 the Goldilocks of crypto crowdfunding entered the world arena via the IDO model, which introduced accountability and transparency via blockchain technology and made project development more accessible through decentralized fundraising. The IDO launch model allows projects to navigate around expensive listing fees, and launch straight away to investors on decentralized exchanges.

Other benefits of the IDO/Launchpad model include a more efficient launch process, and most importantly, a fair and open source fundraising avenue, verifiable on a public blockchain. In contrast to ICOs and IEOs, in which the tokens launched are frequently pre-mined and often pre-sold, IDOs do not bar small investors from early stage investing, and from enjoying the largest share of returns. Decentralized fundraising platforms, like Karus Starter, make investing in IDOs accessible to all levels of investors through a tier system, while simultaneously limiting the allocation of tokens to allow for sustainable price growth.

Less Regulatory Oversight: Like all things in crypto-land, it is crucial to do in-depth research on potential investment opportunities. This is definitely true for launchpads, which lack the regulatory scrutiny offered by centralized exchanges. A key indicator of a launchpad’s integrity can be verified by confirming that they provide anti-scam vetting, Know Your Customer (KYC,) and anti-bot protection measures at launch. As an investor, it is also wise to select launchpads with sustainable tokenomics and responsible security hygiene, such as routine audits. Oversubscribed IDOs: Due to popular demand and the tendency to offer smaller token sales than ICOs and IEOs, IDOs are often hugely oversubscribed and difficult to participate in. Traditionally, whitelisting procedures and capping IDO allocation via a tier system is used to mitigate the raw demand for participation, but Karus Starter offers an innovative new solution: it’s Auto-Invest Feature, which allows it’s upper tier members to automatically participate in IDOs via a pre funded wallet without having to stress over FCFS gas wars.

At a high level, launchpads can be broken down into two categories: generalists and ecosystem specific. Generalists launchpads, which predominated when IDOs were mostly confined to Ethereum, launch individual projects unrelated to one another, and uncategorized according to their role within a blockchain ecosystem. Each project launched exists individually, on the merit of their capabilities, with little in-built relationships to other launches. Ecosystem specific launchpads, on the other hand, incubate their launches with the specific intention that they will go on to function within a network of other projects on a shared blockchain. The underlying intention is to bolster each project’s prospect for long term success by utilizing synergy and network effects.

Karus Starter belongs to the second class of launchpads, and has conscientiously baked synergy into a core ingredient of its infrastructure. Karus Starter ecosystem provides early support for emerging projects through the expertise of the established projects and from incentivized community building. On top of holding the KST token, IDO participants are incentivized with a higher allocation win rate by holding any of the previous IDO tokens in their wallet. This is designed to create an ecosystem of IDO projects that can benefit from each others’ success, fostering a community of collaborative contributors.